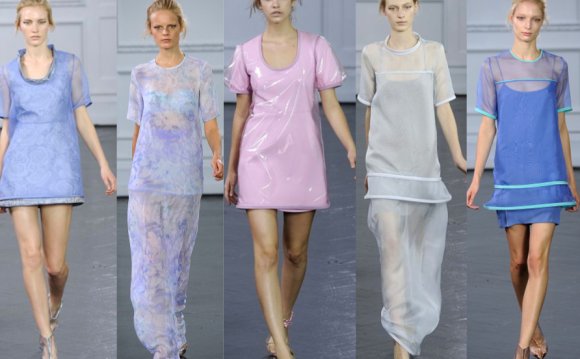 The space race in the 1960s produced a crop of young designers aiming to equip the fashion masses for what they assumed to be the next frontier. Chin-strap space bonnets, flat ankle boots, and sleek, plastic-like tech fabrics typified the space-age look as women readied themselves for a new sartorial stratosphere. Nowhere was this truer than with André Courrèges, whose designs epitomized the era’s affection for everything outer space.

Designing for the year 2000, Courrèges’s eponymous label championed the youthful mod aesthetic for his sophisticated 1960s couture clientele. Abbreviated hemlines, contrasting borders, and punchy stripes in silhouettes borrowed from children’s wear comprised the designer’s vocabulary. A photograph by William Klein (a fellow proponent of the mod aesthetic) from Vogue’s March 1, 1965 issue celebrated the then-fledgling designer: Dressed exclusively in Courrèges, a pair of bespectacled models appear as fashionable intergalactic representatives from the planet earth.

But the look came down to earth, too: One might recall Audrey Hepburn whizzing around in her convertible in the opening sequence of How to Steal a Million, outfitted in milky white Courrèges, from her chin-strap helmet to her white kid gloves. And the Courrèges look inevitably finds its way onto inspiration boards at many of our contemporary designers’ studios: Consider s astronaut jumpsuits at Christian Dior’s fall couture 2014 show, or Frida Giannini’s coupling of mod shifts and patent-leather boots at Gucci’s fall 2014 show. And just as designers are continuously looking back to the future, why shouldn’t you own a piece of fashion history? Click through to shop the look.