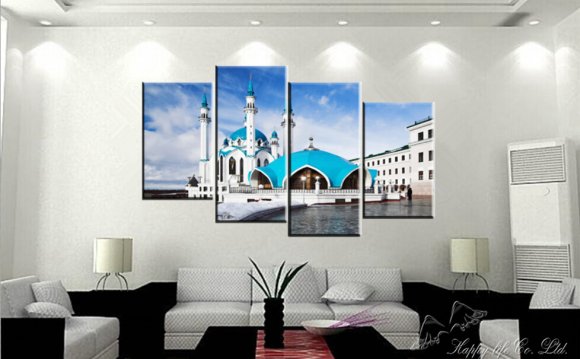 The Prophet’s mosque, with its austere plan, large square enclosure, orientation toward the qibla, and minbar, provides the basic elements of subsequent mosque architecture. The first mosque type to emerge was the hypostyle plan (Fig. 3). Its basic unit, the bay (a covered area defined by four columns), could be expanded upon so the mosque could grow with the community. The hypostyle mosque typically has an inner courtyard, called the sahn, surrounded by colonnades or arcades (riwaqs) on three sides. Within the courtyard there is usually an ablutions fountain, where the wudu’ (minor ablution) is performed before the salat (prayer). There are three entrances into the sahn. The principal entrance can be a monumental portal as built in Cairo in the Fatimid Mosque of al-Hakim (1002 c.e.). Passing through the sahn, the worshiper walked into a covered sanctuary area or haram. The haram of the Great Mosque of Cordoba (786, 962-966 c.e.) is one of the most visually breathtaking. The arches of the double-arch arcades are composed of alternating red brick courses and pale stone voussoirs that when viewed from within the sanctuary produce a visually captivating labyrinthine configuration over one’s head. Once inside the sanctuary of a mosque the focus is the qibla, a directional wall that indicated which way to pray. In the center of the wall was often a semicircular niche with an arched top, known as the mihrab. In large mosques a minbar located to the right of the mihrab was also included. It was from atop the minbar that on Fridays the khutba (sermon) was delivered by the imam or prayer-leader. The minbar is based on the stepped platform that was used by Prophet Muhammad. It ranges from a simple three-step elevation to a highly decorated monumental stairway of many steps. The very top of the minbar is never occupied as it is symbolically reserved as the space of Prophet Muhammad, the original imam.

In large mosques another platform called the dikka is provided at the rear of the sanctuary, or in the courtyard, and along the same axis as the mihrab. A qadi repeats the sermon and prayer from the dikka for those standing too far from the minbar. Located outside of some mosques is a minaret that, along with the dome, has become the architectural symbol of Islam due to its ubiquitous presence and high visibility. Constructed as a tower, it either stands outside the mosque precinct or it is attached to the outer walls or portals of the mosque. The minaret varies in shape, ornamentation, and number depending on the region and building conventions of the patron. Besides visually broadcasting the presence of the mosque and Islam within a city or landscape the minaret also serves as an effective place for the mu’adhdhin or “caller” (also muezzin) to perform the adhan (call to prayer) and be heard for a great distance. The maqsurah is a later addition made to the hypostyle-plan mosque. It is a differentiated, protective space, adjacent to the qibla wall. The maqsurah is found in mosques where the imam or ruler wanted either to be protected or ceremonially separated from the congregation. It was originally built as a raised platform separated with a wooden screen that allowed total to partial concealment of its occupants.