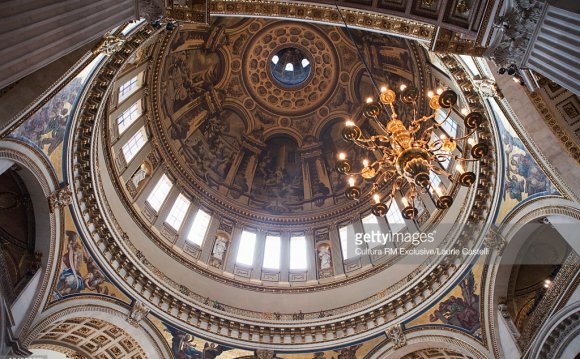 Soon, ancient engineers began experimenting with arches.
Around 100 A.D., Roman builders rotated an arch in a circle and discovered that it created a strong three-dimensional shape - the monolithic dome. In time, they were capping churches and mosques with this new and brilliant design.

Masonry dome:
Pantheon The earliest domes were made of stone.
The earliest dome, the Pantheon, was so heavy that engineers carved intricate shapes, called coffers, along the walls to reduce the weight of the enormous structure. They also gouged a hole, called an oculus, at the top, which created a daily light show for which the Pantheon is still famous. Mihrimah Mosque interior Tension rings:
St. Peter's Basilica Double domes:
U.S. Capitol In the quest for height, engineers came up with a few tricks.
By the early 1400s, Roman engineers began building two domes in one to create the illusion of even greater height. The U.S. Capitol dome, built in 1793, gets its height from this engineering sleight of hand. The large outer dome is a thin shell, held up by a ring of curved ribs. Underneath it all is a smaller, self-supporting dome, visible only from the inside.

The U.S. Capitol dome is also one of the earliest domes made of pre-fabricated ribs. The switch from heavy to lightweight metal ribs in the late 18th century greatly reduced the weight of domes being built around the world.

But a 20th-century invention would change dome engineering forever.
In the 1950s, a radical new design - the geodesic dome - changed the way engineers looked at domes for the first time in 2, 000 years. Invented by American engineer and architect Buckminster Fuller, the geodesic dome is a partial sphere shape structured from a series of triangles, rather than a series of arches.