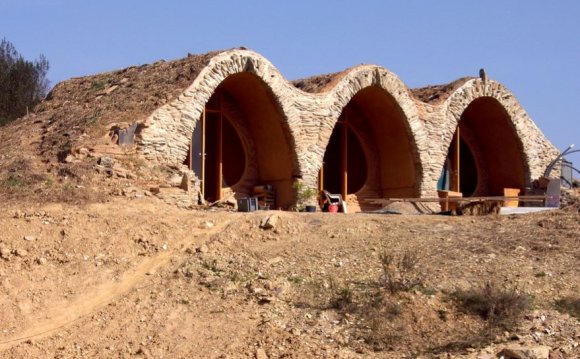 The buildings discussed to date in this course have used post and lintel construction. As has been noted, the distance spanned by this system is restricted by the size of the stone which can be quarried and by the inherent tendency of stone to break under its own weight if the span is too great.

The arch may be said to have originated with the idea of placing a considerable number of blocks in a concentric arrangement. The wedge-shaped blocks, called voussoirs, hold each other firmly in place and prevent each other from slipping. The voussoirs at the top, or crown, of the arch convert the downward pressure into lateral (sideways) pressure, or thrust, which is transmitted from the upper voussoirs down around the opening and finally into the ground through the wall or pier on which the arch rests. Not only can considerable distances be spanned in this way, but arches can carry a much heavier load than a horizontal lintel.

Since an arch depends on the interdependence of its parts, it will not stand until each of its parts is in place. To hold them in position during the process of construction it is usual to build a semicircular wooden form called a centering. When the voussoirs have been fitted, the centering is removed and the arch stands unaided.

A vault is a ceiling of brick, stone, or concrete built in the principle of the arch. A tunnel vault, or barrel vault, is a tunnel-like, semi-cylindrical extension of an arch, which may be thought of as an unbroken series of arches pressed together, one behind the other. It cannot be lighted except at the ends without being structurally weakened, because, as in an arch, continuous abutment must be applied to absorb the thrust carried down along the haunches to the walls supporting it. However, arches may be introduced in the supporting walls and transverse ribs may be inserted in the vault to concentrate thrust at a few strongly buttressed points, thereby permitting a reduction of weight and thrust in the segments of vaulting between the ribs.

If a barrel vault is intersected at right angles by another barrel vault of the same size, a cross vault, or groin vault, is formed. This is a very efficient form of vaulting allowing full illumination from the sides. Groin vaults also allow a great saving in material and labor over the simple barrel vault; thrust is concentrated along the groins (the four diagonal edges formed along the points where the barrel vaults intersect), so the vault need only be abutted at its four corners.