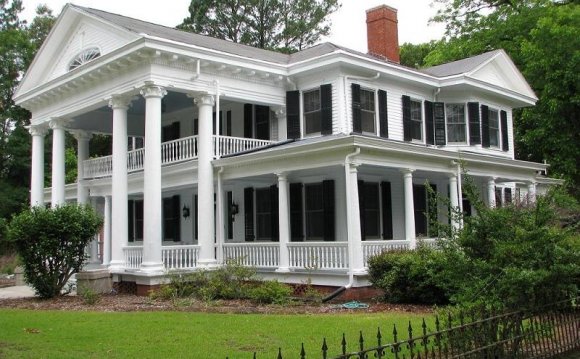 The supporting columns are typical of Greek Revival-style Colonial homes.

The difference between Colonial and traditional home styles is quite simple; Colonial refers to a specific type of style, while traditional is a broader term encompassing many styles, including Colonial. Colonial architecture and interior decorating are inspired by the architecture and decor of the Colonial era in America, which spanned roughly around 300 years, ending in the early- to mid-1800s. The numerous home styles that fall under a traditional label have timeless designs with historical roots, leaving out only the most modern and contemporary styles that emerged in the mid- to late-20th century.

Colonial homes are symmetrical, with a centered front door and an equal number of windows on each side. A typical number of windows showing on the front of the home is nine: two on each side of the door, two windows directly above the first story windows on the second story, and one directly above the door. Homes have a central chimney or one on each end of the house. Inside the home, a central stairway leads to upper bedrooms branching off from a central hallway. These characteristics are typical of New England Colonial homes. Variations developed in different regions of the country, according to the dominant culture in the area, such as Spanish Colonial, Dutch Colonial and French Colonial.

Colonial architecture and decorating also varies by time periods. Styles changed during this 300-year-long era. Colonial style starts with the First Period or Post-Medieval English, from 1600 to 1700. Next came Georgian, from 1700 to 1780; followed by Federal, which ranged from 1780 to 1820; and Greek Revival, from 1825 to 1860. Symmetry was a common element in all these styles except early First Period homes, which had asymmetrical doors and window openings. Georgian architecture, named for the succession of English kings named George, was influenced by the European concept of gentility. Federal style also drew inspiration from European trends in the work of architect Robert Adam especially. Greek Revival architecture focused on Grecian doorway moldings and window frames and columns supporting porch roofs.

Although styles such as Ranch and Craftsmen seem to embody the all-American lifestyle and can be found scattered throughout the heartland of America, you will still find European influences in this and practically any other style. Country-style homes include sub-styles such as Cottage, Farmhouse, and Log or Lodge style homes. New American, another suburban home style suitable for large properties, borrows many traditional Colonial elements but features largely asymmetrical facades and complex roof lines with multiple gables in varying heights, similar to Victorian-style homes.