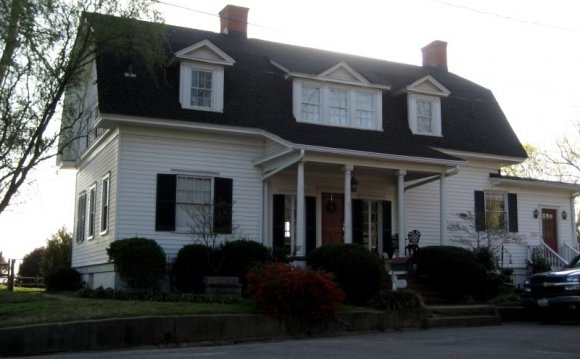 During the 1700s, European settlers in North America incorporated the architectural styles of their native countries into their new homes. The styles that arose can be referred to as "Colonial architecture, " which includes Georgian Colonial, Spanish Colonial, German Colonial, French Colonial, Dutch Colonial, Federal and Cape Cod.

In this article, we'll refer to Georgian Colonial architecture, which is characterized by a rectangular, symmetrical and formal style. Georgian homes find their roots in both Italian Renaissance and the classical architecture of ancient Greece and Rome. These homes are often marked by a centrally located front door, evenly spaced double-hung windows and simple side-gabled roof.

"This style originally was all about trying to reproduce what the colonists had known back home in England, ” says Pete Shannon, an assistant professor at Kent State University in Kent, Ohio. "Eventually, those who chose this style were attempting to emulate those wealthy enough to build the original homes."

The first examples of Georgian-style architecture in America appeared in the British colonies. The dominant style up and down the East Coast throughout the 1700s, with Colonial Williamsburg the most notable, Georgian Colonial homes can be found in almost every community.

"These homes were ideally constructed of brick. But as you moved north toward New England, where brick was less common, wood-frame construction was the dominant technique, " says Shannon.

The home’s age and whether it is constructed of brick or wood will dictate its maintenance needs. Wood clapboard that has yet to be entombed by vinyl siding will always need periodic staining or painting. Masonry exteriors are considerably more low-maintenance, requiring only sporadic tuck pointing. Examine brick-and-mortar walls for cracking, which can point to foundation issues.

Original, multi-paned windows are not very energy efficient, so look for tight fits and working storms. Check to make sure all panes are intact, with no breaks, cracks or chips. Old windows will need to be re-glazed occasionally to keep the putty soft, ensuring a good seal.

"The older the house, the better the roof, " says Shannon. This adage suggests that yesterday’s slate and wood shake roofs were designed to last a lifetime, unlike today’s replacement asphalt shingles. All roofs require regular inspection and maintenance, even slate and shake.

Colonial Style House in Patzcuaro Mexico for Sale US 200,000