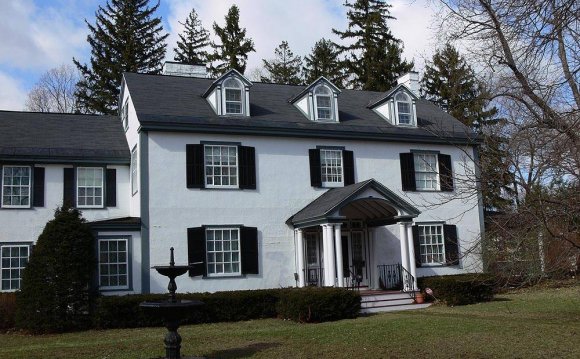 One of the most classic, understated house styles is the Colonial Revival. Stately and distinguished, rather than cute or cottage like, they are substantial homes that declare that the owners are persons with a solid center and traditional values.

Most are symmetrical, where each side is a mirror image of the other. Decorative elements are restrained and drawn from Greek and Roman classical architecture. The entry is generally very obvious with a large door, transom, sidelights, hood, or even a portico.

During the 1890s, Colonial Revival was expressed everywhere. One of the major drivers behind its popularity was the 1893 World's Columbian Exposition in Chicago. Prominent architects from across the US competed to out-do each other with their designs in what was then called the "White City." During the day, the buildings were white, but at night the magic of the city transcended anything seen before; all the buildings were lit in electric lights. The effect was far reaching as millions traveled to Chicago to see the fair. When they left, they took an appreciation for classical architecture with them.

There was really only a hundred years between the original "Colonial" architecture and the revival styles that attempted to emulate it. Early Colonial Revivals style were sometimes excessive ... sort of Queen Anne attitudes with Greek and Roman details. Neo-Classical, it could be argued, is one expression of the synergy between the two.

Later, post-1900 plans tended to lean toward more design restraint as time passed. The Arts and Crafts movement emphasized quality and craftsmanship and what the Colonial Revivals tended to lose in exotic detail they tended to gain in proportion and dignity. A variety of cleaner, simpler designs evolved after World War I that were classically informed bungalows and cottages coming full circle to their American Colonial roots during the late 1920s and 1930s when the Cape Cod and Garrison styles attained more prominence.