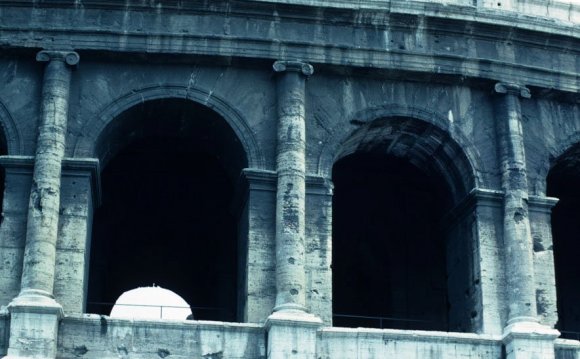 The Colosseum
is roughly elliptical in shape, with its long axis, oriented WSW-ENE, which measures 188 metres and the short one 156. The building stands on a base of two steps; above it there are three floors of arcades and a fourth storey without arches but with small rectangular windows. There were eighty arches on every floor, divided by pillars with a half column.

The four arches on the axes of the building were the main entrances, and were probably decorated with a little porch and a statue. The other 76 arches were numbered for an easier access to the seats. Only 31 arches of the outer ring, from number XXIII to LIV, have remained intact. All around the rims of the first three floors there were circular promenades that could accommodate most of the public in case of rain.

The order of the ground floor half columns is the Tuscan one (a Roman variation of the Doric order), on the second floor the semicolumns are Ionic and on the third floor Corinthian. The panels of the fourth floor - the attic - are divided by flat composite (Roman-Corinthian) lesenes in place of the half-columns of the lower arcades, with a rectangular window every second panel. Ancient authors mention - and the images that we have confirm it - that a series of bronze shields (clipea) was affixed all around the attic on the panels without the windows.

The arena where the shows took place measures 76 by 44 metres; its floor was made with wooden planks. All around the arena there was a wall called podium, about 10 feet high, whose scanty remains do not allow for a precise reconstruction. During the shows the arena covered with yellow sand (harena) taken from the hill of Monte Mario; on special occasions the arena was covered with specially coloured sand, or mixed with speckles of glittering minerals.

Over 100.000 cubic metres of travertine stone (45.000 only for the external wall), quarried near Tibur (today Tivoli), were used. A road was built from the quarries to Rome for this purpose. A similar quantity of tuff blocks, bricks and opus cementicium (concrete made of small lumps of tuff in mortar) were also used, thus adapting the resistance of the materials to the loads and thrust that had to be supported. The combination of different materials improves the elasticity of the whole: the main pillars are made of travertine, radial walls are of travertine and tuff, the vaults are cast in cement work, and the walls were plastered and painted white and red (most of the stuccoes have disappeared). The passages corresponding to the main entrances were decorated with paintings and stuccoes, which have barely survived the centuries. The travertine blocks were connected by iron grips that were removed a long time ago, leaving those ugly holes between the blocks. It has been calculated that 300 tons of metal were used only to this purpose.

Like every amphitheatre, the Colosseum had two entrances to the arena on the main axis: the NW gate was the Porta Triumphalis, where the gladiators made their entrance during the pompa gladiatoria, the parade that took place outside and led to the amphitheatre. The SE gate was called Porta Libitinaria (from Libitina, a Roman goddess of death, corpses and funerals), as dead gladiators were carried through it.
All around the top there were sockets for 240 wooden beams which supported the awning (velarium) that covered the spectators from the sun and was manoeuvred by a unit of sailors of the imperial fleet, stationed nearby. Some of the sockets are still visible today.