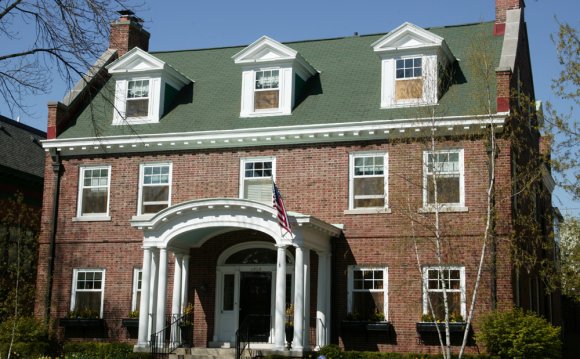 Some Georgian Revival Houses can, at least from afar, be confused with eighteenth-century precedents; others resemble later Federal Houses, but most are a mix of elements that allude to the past but are actually quite modern, comfortable homes.

The Georgian Revival often has the Classic Colonial shape. Typically two or three stories tall, these designs are symmetrical with hipped, gable, or gambrel roofs. Elaborate doorways are usual, with pilasters, sidelights, and even porticos. In a departure from true colonial houses, there are combination windows in some Georgian Revival Houses, with two or even three separate units installed as one. The sash may have multiple lights or a single pane of glass, as 12/1, 6/6, or 1/1 configurations are all common.

Inside the typical Georgian Revival house, the symmetry is maintained with the entrance and stair hall at the center of the home. However, the rooms on either side rarely mirror one another. These are houses where the emphasis has changed from a stubborn insistence on balance to practical considerations like squeezing purpose-specific spaces such as the kitchen, dining room, and living room into an efficient floor plan.

REMODELER’S NOTES. The typical Georgian Revival House built before the Depression is thought by some architectural historians to be the best ever built in America. That isn’t to diminish the finest of houses from a range of other times and in many other styles, but taken as a group, Georgian Revival houses are well built with an eye to the quality materials and craftsmanship that later houses often lack. In addition, they are modern houses, with kitchen spaces, bathrooms, and floor plans that suit today’s needs without requiring wholesale gutting to reengineer the floor plan.