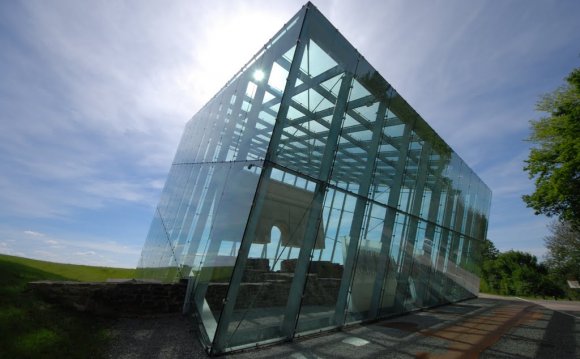 Roman people usually didn't have hot baths in their houses, because it was too hard to heat up the water. And people who lived in cities had to live in small apartments, often a whole family in one room, and so they didn't have room for baths or any yard to exercise in. So instead they used to go to public baths.

Public baths were something like our community centers today, or like a health club. They had swimming pools fed by aqueducts, and hot tubs, and exercise equipment, and often gardens and libraries and theaters as well. Some of them had temples, like the Mithraeum in the Baths of Caracalla. Like community centers, you had to pay a small fee to get in, but they sometimes also had free days.

But unlike most community centers today, Roman baths were made to be really impressive, beautiful buildings. They had high, vaulted ceilings, and the walls were decorated with marble and frescoes. The floors had complicated mosaics.

Pretty much any town in the Roman Empire had at least one bath building, and many had more than one. Army camps had them, too. But of course the biggest, fanciest ones were in the city of Rome.

One example of a public bath building that is still pretty well preserved is the Baths of Caracalla in Rome (built in the early 200s AD).

Roman Baths and Bathing, edited by Janet Delaine and David Johnston (2000). A supplement to the well-regarded Journal of Roman Archaeology. By specialists, for specialists.

The Architecture of the Roman Empire: An Introductory Study, by William MacDonald (1982). Actually not so introductory, but it's got great illustrations that really make the building techniques clear. Explains how bath buildings were built.