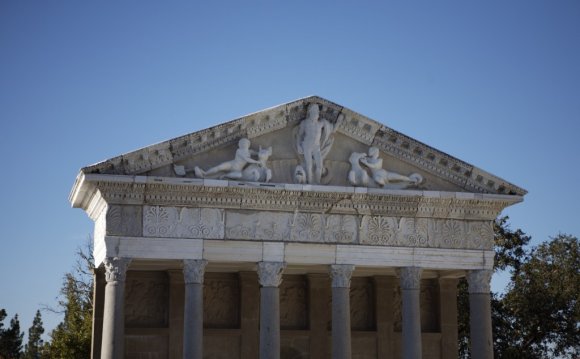 Even though it may seem simple, the Greeks created a wonderful and lasting legacy of architecture. The columns and architraves were carved with leaves and flowers, scenes of battles, and mythological creatures. The columns were decorated with lines and bases, and capitals, which topped off the columns and connected them to the architraves.

These are some important terms to learn about Greek architecture: • Doric: The Doric order is the oldest and most simple order. The columns have no base and the columns have a very simple capital. In other words, Doric buildings were the least decorated. Archaeologists believe that Doric architectural buildings, which were built in stone, evolved from wooden buildings that were very similar.

• Corinthian: The Corinthian order is a lot like the Ionic order, but the capitals are even more elaborately decorated, usually with leaves and floral patterns

Types of buildings: Besides just houses and marketplaces, Greek cities had many different types of specialized buildings. Many of these buildings can be found in most ancient Greek cities.

Temples: Temples are the most common type of public buildings in ancient Greece. The purpose of a temple was to store a religious statue. Some temples were very large, but others could be very small, depending on the size of the statue and how many people wanted to visit it. Perhaps one of the most famous of Greek temples is The Parthenon.

Stoas: Stoas were a lot like temples, but were extra long, and sometimes they were even two or three stories high. These buildings were big because they were used as large gathering places for the public, such as market places, public offices, and places where people could stroll and meet other people.

Theatres: Theatre performances and plays were a big part of Greek life, so theatres were an important part of Greek cities. Usually, they were built into a hillside, where the public could sit along the hills and watch the action. In large cities, some theatres could sit tens of thousands of people!

Assembly Hall: An assembly hall was similar to a theatre, but was much smaller. This building was used to have important town meetings.

Gymnasia: Gymnasiums are still a common part of most schools, and these buildings began with the Greeks. Parts of ancient Greek gymnasia were wrestling grounds, which were open to the outside, and running tracks. Other parts of the gymnasia were lecture halls and other smaller rooms where Greek athletes and warriors could train.

Greek architecture has had a long and important legacy in western history. Even now, people continue to copy Greek buildings, and many people go visit the ancient remains of the thousands of ancient Greek buildings still standing today.