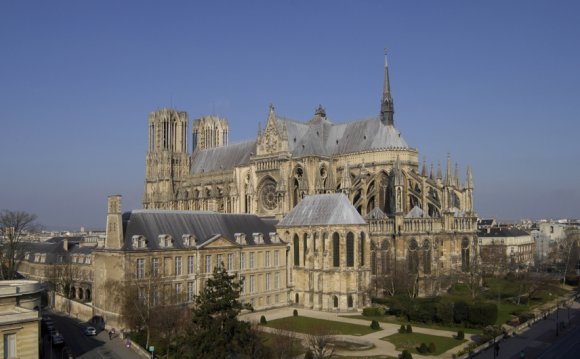 Before the current Cathedral of Notre-Dame

Paris, formerly known as Lutetium, was evangelised in the 3rd century. There were enough Christians in the year 250 for Pope Fabian to send
the first bishop, Dyonisius, to Paris. At the time, Christians were persecuted all over Gaul and the Roman Empire.
the bishop Denis had to practice the faith in secret, probably in a simple
room in a Gallo-Roman villa. Denis was martyred a few years later with his helpers on Mont Mercure, later named Mont Martyrum, or Montmartre. His successors lived in hiding until the Emperor Constantine declared peace with the Church in 313.

It was then possible to build Christian edifices, and the first one was
most likely built on the left bank, perhaps, as some stories say,
next to the current Val-de-Grâce. However, we do not have any precise information on this first cathedral or the ones to immediately follow it. Various excavations have been done on the eastern part of the Ile de la Cité, the current location of the Cathedral of Notre-Dame. They lead to believe that at the beginning of the common era, there was a pagan temple, later replaced by a large Christian basilica with five naves, which most likely
resembled the ancient basilicas of Rome or Ravenna. We do not
know whether this cathedral, which was dedicated to Saint Stephen, was built in the 4th century and was later renovated or whether it was built in the 7th century with old or reused elements. One thing, however, remains certain. This cathedral dedicated to Saint Stephen was very large. Its western façade located about forty metres west of the current façade of Notre-Dame, was slightly less wide than the building’s total length, approximately half the current width. Inside, the naves were separated by marble columns, and the walls were decorated with mosaics. According to the liturgy, it had a baptistery on its north side, named after Saint John the
Round.

Saint Stephen’s cathedral seems to have been regularly maintained and
repaired, at least enough to resist damage from wars and the wear of
time. However, in the mid-12th century, under the reign of Louis VII, the bishop Maurice de Sully and the chapter made an extremely important decision:
they decided to build a new cathedral instead of Saint Stephen. It would be much longer and taller than the previous one, since the new
architectural techniques that were gaining favour,
the ogival style, commonly known as the gothic style today, allowed it.

Birth of the Cathedral of Notre-Dame

Paris was experiencing a period of great demographic expansion and economic dynamism and was affirming its status in the kingdom of France as:

Maurice de Sully was bishop of Paris from 1160 to 1196. From the time he was elected, he provided a pastoral, theological and spiritual response to his diocese’s deep transformations by rebuilding a cathedral church dedicated to the Virgin Mary (Notre-Dame) and making it a bishop’s church, a canon church and a baptistery. This project was the focal point of an enormous urban construction site:

Tradition has it that Notre-Dame’s first stone was laid in 1163 in the presence of Pope Alexander III.

The new building fell under the new art movement known as the gothic style (or the ogival style). This style had already been seen on other worksites:

The first anonymous builder began with a double side aisle plan without a salient transept (the same plan used in the previous cathedral, Saint Stephen), a four story construction with tribunes, large, 32.5 metre sexpartite arches, predominantly horizontal lines, original archwork in the curved part of the deambulatory, alternating “strong” and “weak” pillars between the first and second aisles.

Four major construction campaigns, led by four builders, were the highlight of this period:

1163-1182 : construction of the choir and its double deambulatory. The choir’s high altar was dedicated on 19 May 1182 by Henri de Château-Marçay, the Papal legat, assisted by the bishop Maurice de Sully. (first builder).

1182-1190 : construction of the last three bays in the nave, the side aisles and the tribunes. (second builder).

1190-1225 : edification of the façade courses and the first two bays in the nave, connection of the two bays to the upper façade and the Gallery of Kings. (third builder).

1225-1250 : upper gallery and two towers on the façade, modification and expansion of the upper windows and fitting out the nave side chapels between the flying buttresses’ abutments (fourth builder).

Construction of the choir chapels and the apse between the buttresses.

Installation of the large flying buttresses in the choir and the 15-metre apse.

Erection of the tribune and a historiated stone screen around the choir and the sanctuary.

Modifications in the 17th and 18th centuries

Refurbishment of the sanctuary and the choir, led by Robert de Cotte, to fulfil the vow of Louis XIII.

Restoration of the South Rose Window.

Replacement of the 12th and 13th century stained glass windows with white windows in the mid-18th century by the Le Vieil brothers.

New interest in the 19th century

New context in the early 19th century: a new concordat is signed in July 1801 and Notre-Dame is given back to the Roman Catholic church on 18 April
1802. In 1831, Victor Hugo published The Hunchback of Notre Dame, which was a huge success. In 1844, the government of King Louis-Philippe I decreed the restoration of the Paris cathedral and the construction of a sacristy.

To restore an edifice is not to maintain it, repair it or remake it, it is to re-establish it in a complete state that may never have existed at a given moment. (Viollet-le-Duc)