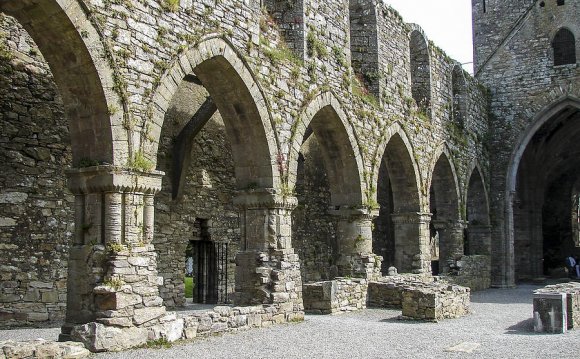 Water is heavy stuff. When the ancient Romans undertook to build an aquaduct to carry fresh water from the mountains into the city, they needed a structure strong enough to support all that water, as well as itself. The best way to do this is to distribute the weight evenly, and directly to the ground. The trough of the aquaduct could rest on the center and top of the arch, the keystone (red in the models). From there, the downward vertical force is modified partly into outward horizontal force, and divided in half - half for each leg of the arch. Once it gets to the base, the horizontal force still has to have something to press against: the heavy outer columns (light blue in model A). Once these have countered the weight of the keystone (and whatever's on top of it), the arch will support itself. It's hard to be sure when (or why) the first arch was built. We do know that the Romans of the last few centuries BCE were building "triumphal" arches to welcome their military heroes home from war. Over the next millennium the arch slowly evolved, partly due to the spread of Christianity, which encouraged the contruction of tall, grandiose churches, in metaphorical pursuit of Heaven.

When Medieval Europeans decided to build massive stone cathedrals, they had to use more complicated designs of arches: one with heavier supports on the sides (called flying buttresses, light blue in model B); and one with a diamond-shaped keystone (the Gothic arch, model C). Flying buttresses act the same way ancient Roman columns did, countering the horizontal force of the arch. They also provide for more ground area underneath: more worshippers could fit into a church built with flying buttresses. The keystone of the Gothic arch exerts more vertical force, letting the arch stand without horizontal support, and allowing for a much taller construction - now the songs of the Christians could echo closer to Heaven.

The Ancient Arches of Gold