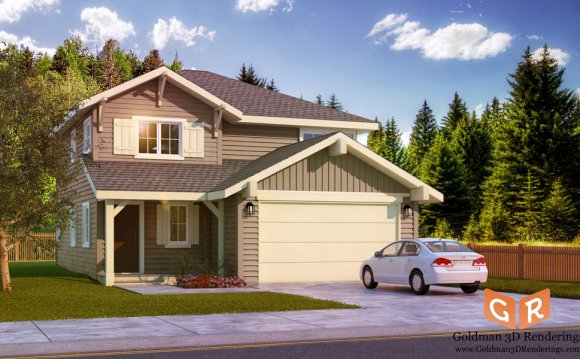 A-frame style homes have a dramatic sloping roof, and many windows at the rear or front of the home. They became popular during the 1950s through the 1970s. A-frame style homes are usually common for vacation homes, because the roof slopes down to the bottom of the house for low maintenance and helps direct snow off the house easily. One down side to an A-frame home is the triangular shape – there is a lot of unused space along the walls.

The southwestern style home became popular in America during the 1920s and the early 1940s. They consist of simple wood, brick and stucco construction with lots of decorative details. Usually a one level style, the design is heavily influenced by the original Spanish colonial settlements. The interior of the homes are usually highly decorative with carved doors and intricate stonework. They have smooth archways and exposed wooden beams. The southwestern style home is usually in hot, humid climates so the flooring of the home is usually tile throughout. The roofs are also made from tile to help keep the inside of the home cool.

Greek style homes were popular between 1825 and 1860. During this time, America was inspired by ancient Greek ideas of democracy and also Greek architecture. The Greek style has decorative columns and large entry porches. The columns of Greek homes serve as the focus of the home. The columns are very decorative and detailed with carvings and designs. Greek homes are also known for having moldings, embellishments, and painted plaster exteriors. Typically designed as a two-story home with large entry ways, the floor plans of these have long hallways and formal rooms with long narrow windows. You can find a similar style of this home in the south which is called the Southern Colonial.

Georgian homes are so named because of the first four British monarchs of the House of Hanover – all named George. This style home is more popular through the northeastern states starting in the early 1700s. The layouts of Georgian homes are very symmetric with the design of the windows, the floor plan and door placement. These homes are usually brick, at least two stories and have fireplaces on both sides of the home. The entry ways of Georgian homes are very detailed with wooden pillars or brick patterns with doors designed with half-moon windows. The Georgian style home is known for its windows – most have as many as 12 windows on the front! When the homes were popular in England in the 18th century, windows on a home were a sign of wealth, because the government taxed people for the windows they had on their homes.

As you can see, there are many different styles of homes in America with influences from around the world. Knowing the types of homes available, you can identify what you like best, making it easier to find your dream home and begin a little history of your own.

The different styles of grass