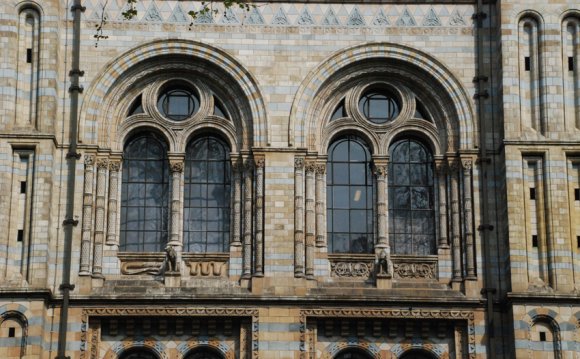 One of the most important styles of European art that developed during the Middle Ages was called Romanesque. This style began during the 1000's and lasted for more than 200 years.

Romanesque architecture is massive, low, and solid-looking. Round Roman arches, thick walls, and small windows are typical of the buildings. Churches were built in the shape of a cross, using the basilica (a type of Roman building) as the basis for the design. Another important feature of Romanesque architecture was the use of a separate bell tower, or campanile, that was built beside the main church.

Although there were slight variations in each country, the Romanesque style dominated Western Europe until it was replaced by the Gothic style.

Gothic Architecture
Three architectural features are typical of the Gothic. These are the pointed arch, the ribbed vault, and the flying buttress.

It is the pointed arch that most clearly makes Gothic building look different from Roman and Romanesque work. In the older style the semicircular, round arch was used everywhere. But Gothic architects did not invent the pointed arch. It had been used much earlier in the Near East. It was used by Muslim artists in Asia, Africa, and even in parts of southern Europe. The use of the pointed arch in Europe started very soon after the First Crusade (1099), when Jerusalem was captured from the Muslims. Thousands of crusaders from Western Europe saw buildings and works of art entirely different from those that they were used to. Though they did not believe in the Muslim religion, there was no reason why they should not imitate the art that pleased them. This explains the arrival of the pointed arch in Europe.

The Europeans used the pointed arch in a new way. Medieval buildings were constructed with vaults-ceilings made by continuous arches of heavy columns. Architects of the late Romanesque period had experimented with the ribbed vault, which allowed them to build much higher churches. The plan of the church was divided into square sections called bays. At each corner a pier (large pillar) was built. Diagonally from corner pier to corner pier, round arches were built. Because the diagonal of a square is longer than its side, round arches on the sides of a bay would not be as high as the round arches that spanned the bay diagonally. It was found that pointed arches at the sides and round arches at the diagonals would all reach the same height. This system of building is called ribbed vaulting.

The weight of the vaults on the walls tended to force the walls outward. This is called thrust. To support the walls, structures called buttresses were built against the outside of the walls. As ribbed vaulting enabled the construction of higher buildings, it became more difficult to resist the thrust from the arches. To support the additional weight of a higher building, buttresses had to be taller and to project more and more from the wall. Architects discovered that a fairly low buttress could be used to support the taller walls by means of a sloping arch, reaching up from the buttress and pressing against the outside of a higher wall. This kind of buttress is called a flying buttress.

When the flying buttress had been added to the ribbed vault and the pointed arch, all the main parts of Gothic architecture were there.