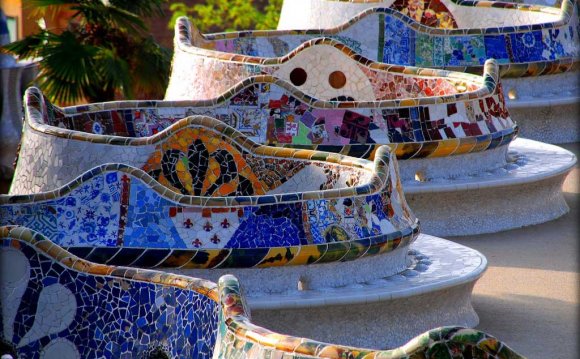 Antoni Gaudí helped the Catalan architecture to worldwide fame and reputation. Gaudí was also an architect and designer with a special ability to synthesise their own tradition and the courage to new technical solutions. He understood to integrate creative and plastic elements in his buildings.

In the footsteps of Antoni Gaudí

With our Gaudí tour we take you in a day to the most important works of this brilliant architect.

Antoni Gaudí was born in 1852 in the Catalan town of Reus as the son of a craftsmen. In Barcelona, he studied architecture; he concluded his studies in 1878. During this time Catalonia experienced a period of cultural and political rebirth, the Renaixença, at a time of economic and urban growth. A big bourgeoisie patronage wanted not to mix with European currents.

The 1888 World's Fair awarded the generation of the modernisme the main impulses. Gaudí overcame the prevailing historical styles of the eclecticism of the 19th century and developed his own aesthetic with its own distinctive, but difficult to classify style.

Gaudí creation is closely linked to his patron, the industrialist and financier Güell. He has not only a considerable number of orders, but he stocked it with a high prestige.
Even at a young age Gaudí was instructed with the construction of the Sagrada Familia, he later devoted exclusively his power to the church.

Gaudí is also a great craftsperson. In collaboration with artists of his time, he designed all the architectural space filled elements: works from forged iron, furniture, ceramics, sculptures, mosaics and stained glass windows. His forms were always organic, curved and into the building.

Gaudí had not only followers in life, his daring forms cried out protest from his critics. Over the years they calmed and today you witness his due recognition.

Antoni Gaudí died in 1926 after a traffic accident.

In 1984, several of his works where on the list of world cultural heritage of UNESCO: the crypt and Facade of Birth of the Sagrada Familia, Casa Vicens, Casa Milà, Casa Batlló and the crypt of the Colonia Güell.

Not listed works of Gaudí