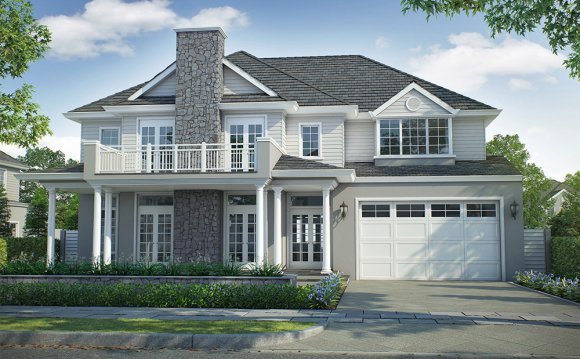 In the course of his 25-year career, architect Frank Greenwald has designed houses everywhere from the Hamptons, where he lives, to as far away as the Caribbean, where he vacations. Some of his projects—at Ralph Lauren’s homes in Round Hill, Jamaica, and in Bedford, New York, for example—have been for people with famously exacting design tastes. In all that time, he says, his work has rarely provoked a moment’s anxiety. “When clients hem and haw and ask, ‘Do I want the sink over here or over there?’ I tell them, ‘The sink has to be there. There’s no other place for it.’”

Four years ago, however, he took on a client who caused him serious trepidation—Frank Greenwald. “It’s challenging for an architect to design a house for himself, ” he says. “There’s all this pressure. ‘What is he going to build? What is it going to look like?’ You have so many ideas in your head. Singling out one is very difficult.”

Greenwald was fond of his previous residence, an old Shingle Style, right next to his office in East Hampton, New York. But after his son and daughter grew up and moved out, he and his wife, Laura, decided they needed a change—“something a little cleaner and fresher and more open, ” he says. “And we wanted to be on the water.”

The couple found an ideal lot: a half-acre parcel in Sag Harbor, right on Long Island’s placid Noyac Bay, with sweeping views of Shelter Island and the North Fork. That’s when anxiety raised its trembling hand. What do you write on a blank slate? And what kind of house do you put on such prime property?

Greenwald initially considered building another Shingle Style dwelling, but one that would be simpler and pared down. Then came a second idea. Though his firm is best known for traditional designs, the architect had always hoped for a chance to create a modern place. “I thought I should try something I hadn’t done before, ” he says, “something I couldn’t do with a client.”

While looking to push beyond his comfort zone, Greenwald certainly wasn’t interested in a home that was forbiddingly austere. “My wife and I like stuff, ” he says. “We collect books and photographs and art. And we love the character and warmth of a Shingle Style house. We wanted a balance between light and open and warm and cozy.”

In the end he designed a boxy two-story structure, topped by a gently sloping hipped roof and featuring big windows with thick wood frames and mullions. While decidedly modern, the house also looks back to the 19th century, recalling the strong vertical and horizontal lines favored by one of Greenwald’s heroes, German architect Karl Friedrich Schinkel. There are four bedrooms: three upstairs, for the couple’s children and guests, and a ground-floor master suite that opens onto the back terrace, which is paved with elegant bluestone and connects to a tranquil swimming pool.

When it came to color, Greenwald knew he wanted his modern-but-not-too-modern house to be a “white thing, ” as he puts it, both inside and out. He chose white stucco for the exterior because it’s easier to maintain than wood, an important consideration when the next-door neighbor is a saltwater bay. “We do plenty of houses that have miles and miles of trim, ” he explains, “but I didn’t want to repaint every two years.”

Still, even a white thing needs a little contrast, so for the doors and window frames Greenwald chose a dark Brazilian hardwood called ipe. Ordinarily used for decks, it added the warmth he and his wife were seeking. “It has a rich, almost boatlike feel, ” he says.

Typically compulsive, architects often want to do everything themselves, and Greenwald custom designed several tables and all of the cabinetry—oak in the kitchen, white lacquer in the master bath. But when it came to decorating, he and his wife had different ideas, and the couple soon agreed they needed a referee to prevent marital mayhem. It was at that point that they brought in Manhattan-based interior design firm Foley & Cox. Principals Mary Foley and Michael Cox are alumni of the Ralph Lauren empire and had worked with Greenwald on several homes, including some of Lauren’s. “We had a good understanding of Frank’s sensibilities and aesthetic, ” Cox says, “and our dialogue was almost like shorthand.”

The designers recognized that, although the Greenwalds live in the Hamptons year-round, they were furnishing a beach house. Natural materials were used throughout—jute rugs on the oak floors, white canvas and linen for upholstery, all without a hint of pattern. Individual pieces are simple but sophisticated, like the Christian Liaigre linen sofa and Poul Kjærholm leather-and-steel chairs in the living room and the huge, inviting Ralph Lauren Home linen sofa in the second-floor family room, where the couple tends to gravitate with friends and family. “It’s a place made for easy living, ” Foley says. “You take your shoes off when you walk inside.”

Shingle Style Cottage In the Village of East Hampton

"The Hamptons" Style Living in the Pacific Northwest