Greek and Roman Art and architecture 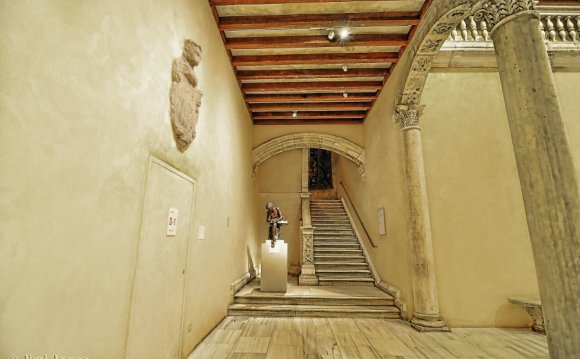 Edited By: R. A. Guisepi

The art of the ancient Greeks and Romans is called classical art. This name is used also to describe later periods in which artists looked for their inspiration to this ancient style. The Romans learned sculpture and painting largely from the Greeks and helped to transmit Greek art to later ages. Classical art owes its lasting influence to its simplicity and reasonableness, its humanity, and its sheer beauty.

BC. By that time Greek sculptors had solved many of the problems that faced artists in the early archaic period. They had learned to represent the human form naturally and easily, in action or at rest. They were interested chiefly in portraying gods, however. They thought of their gods as people, but grander and more beautiful than any human being. They tried, therefore, to portray ideal beauty rather than any particular person. Their best sculptures achieved almost godlike perfection in their calm, ordered beauty.

The Greeks had plenty of beautiful marble and used it freely for temples as well as for their sculpture (see Marble). They were not satisfied with its cold whiteness, however, and painted both their statues and their buildings. Some statues have been found with their bright colors still preserved, but most of them lost their paint through weathering. The works of the great Greek painters have disappeared completely, and we know only what ancient writers tell us about them. Parrhasius, Zeuxis, and Apelles, the great painters of the 4th century BC, were famous as colorists. Polygnotus, in the 5th century, was renowned as a draftsman.

Fortunately we have many examples of Greek vases. Some were preserved in tombs; others were uncovered by archaeologists in other sites. The beautiful decorations on these vases give us some idea of Greek painting. They are examples of the wonderful feeling for form and line that made the Greeks supreme in the field of sculpture.

By the 8th century BC the Greeks had become a seafaring people and began to visit other lands. In Egypt they saw many beautiful examples of both painting and sculpture. In Asia Minor they were impressed by the enormous Babylonian and Assyrian sculptures that showed narrative scenes.

The early Greek statues were stiff and flat, but in about the 6th century BC the sculptors began to study the human body and work out its proportions. For models they had the finest of young athletes. The Greeks wore no clothing when they practiced sports, and the sculptor could observe their beautiful, strong bodies in every pose.

Greek religion, Greek love of beauty, and a growing spirit of nationalism found fuller and fuller expression. But it took the crisis of the Persian invasion (490-479 BC) to arouse the young, virile race to great achievements. After driving out the invaders, the Greeks suddenly, in the 5th century, reached their full stature. What the Persians had destroyed, the Greeks set to work to rebuild. Their poets sang the glories of the new epoch, and Greek genius, as shown in the great creations at Athens, came to full strength and beauty. It was then, under Pericles, that the Athenian Acropolis was restored and adorned with the matchless Parthenon, the Erechtheum, and other beautiful buildings. (See Acropolis; Athens.) There were beautiful temples in other cities of Greece too, notably that of Zeus at Olympia, which are known from descriptions by the ancient writers and from a few fragments that have been discovered in recent times. (For Greek architecture see Architecture.)

The 5th century BC was made illustrious in sculpture also by the work of three great masters, all known today in some degree by surviving works. Myron is famous for the boldness with which he fixed moments of violent action in bronze, as in his famous 'Discobolus', or Discus Thrower. There are fine copies now in Munich and in the Vatican, in Rome. The 'Doryphorus', or Spear Bearer, of Polyclitus was called by the ancients the Rule, or guide in composition. The Spear Bearer was believed to follow the true proportions of the human body perfectly.

The greatest name in Greek sculpture is that of Phidias (see Phidias). Under his direction the sculptures decorating the Parthenon were planned and executed. Some of them may have been the work of his own hand. His great masterpieces were the huge gold and ivory statue of Athena which stood within this temple and the similar one of Zeus in the temple at Olympia. They have disappeared. Some of his great genius can be seen in the remains of the sculptures of the pediments and frieze of the Parthenon. Many of them are preserved in the British Museum. They are known as the Elgin Marbles. Lord Elgin brought them from Athens in 1801-12.

These sculptures are the greatest works of Greek art that have come down to modern times. The frieze ran like a decorative band around the top of the outer walls of the temple. It is 3 feet 3 1/2 inches high and 524 feet long. The subject is the ceremonial procession of the Panathenaic Festival. The figures represent gods, priests, and elders; sacrifice bearers and sacrificial cattle; soldiers, nobles, and maidens. They stand out in low relief from an un-detailed background. All are vividly alive and beautifully composed within the narrow band. The horses and their riders are particularly graceful. Their bodies seem to press forward in rhythmical movement.

Around the outside of the portico above the columns were 92 almost square panels known as the metopes. Each panel depicted two figures in combat.

In the east and west triangular pediments were groups of figures judged to be the world's greatest examples of monumental sculpture. The problem of composing figures in the triangular space of a low pediment was most skillfully solved.

The east pediment represented the contest of Athena and Poseidon over the site of Athens. The west pediment illustrated the miraculous birth of Athena out of the head of Zeus. The use of color and of bronze accessories enhanced the beauty of the pediment groups.

The 'Aphrodite' of Melos, commonly known as the 'Venus de Milo', is a beautiful marble statue now exhibited in the Louvre, Paris. Nothing is known of its sculptor. Experts date it between 200 and 100 BC.