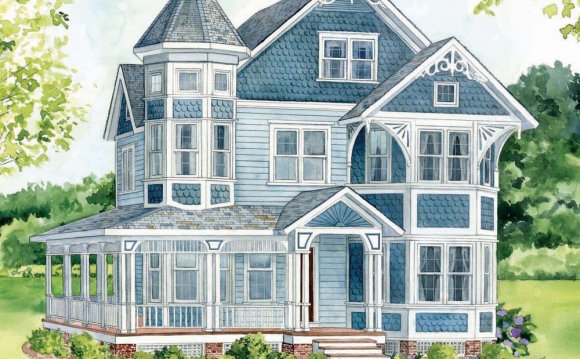 Queen Anne architecture, notable for its ornamental excesses, is also commonly referred to as Victorian style. Spindlework, fish scale siding, and decorative treatments are often seen on every possible surface.

The basic shape is often a two-story with a hipped roof and one or two lower cross-gables, though many are simpler cross- or front-gabled houses.

By the turn of the 20th century, the highly ornamented and exotic Queen Anne style houses had begun to shift toward more decorative restraint. A subtype identified by the McAlesters called the Free Classic showed more classical design elements and often preservationists and old house lovers identify such houses as Colonial Revival with Queen Anne elements or Queen Anne with Colonial ... literally a tomato/tomahto discussion. We use symmetry as the final arbiter.

Though the Queen Anne style waned after 1900, we include it because it is still found in a number of the plan books and was still being built. It had an influence on subsequent styles, especially the Colonial Revival.