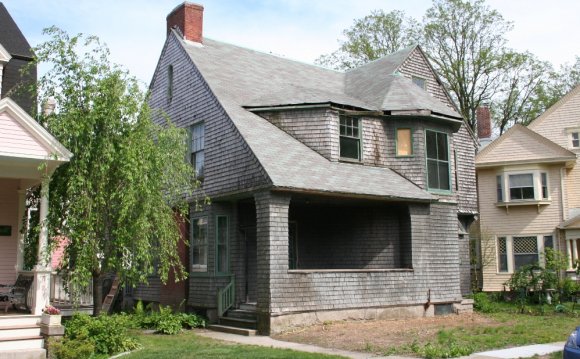 Of the various Victorian styles of architecture, one of the most important that continued from the 19th century into the first two decades of the 20th century was the Queen Anne. Popular from about 1860 to 1890 in England and somewhat later in the US, the Queen Anne style lent itself to the excesses of the Victorian age with its turrets, oriel windows, and medieval influences. Beloved by lumber barons and railroad maggots alike, many of the largest and most spectacular homes of the early 20th century were built in this style.

As a result of the Industrial Revolution, building construction evolved dramatically with the advent of balloon framing and mass production of complex house components like doors, windows, roofing, and decorative details. Balloon construction facilitated the design of much more elaborate footprints with a host of irregular plans, overhangs, extensions, and the like. Instead of heavy box construction necessitated by timber framing, the new, light 2"x4" walls were liberated from their previous constraints making embellished, ornate design common. Many examples of Queen Anne architecture are exuberant sculptural extravaganzas of shape and ornament ... literally the purple prose of late 19th century architecture.

Queen Anne houses most frequently have steeply pitched roofs that may have irregular shapes as well as a prominent forward facing gable. Roof pitch declines in slope as the end of the 19th century nears attaining a much shallower slope after 1900.

Fish scale shingle siding is often employed in various patterns and cuts, as well as spindle work, bay windows and bump outs. Towers are often used with imaginatively shaped roofs ranging from cones and bell shapes to octagons and domes with decorative finials. Interestingly, towers placed at the corner of the front facade are most often a characteristic of the Queen Anne style, whereas placement is often elsewhere on other styles like the Victorian Stick style. Wrap around porches are very common.

The smaller Queen Annes are often described as bungalows, but other than the large front porches that are typical, it is more appropriate to call them cottages. Good examples of the Queen Anne style are seen in Hodgson's Low Cost American Homes, which was published in 1905.

More is NEVER TOO MUCH with a Queen Anne.