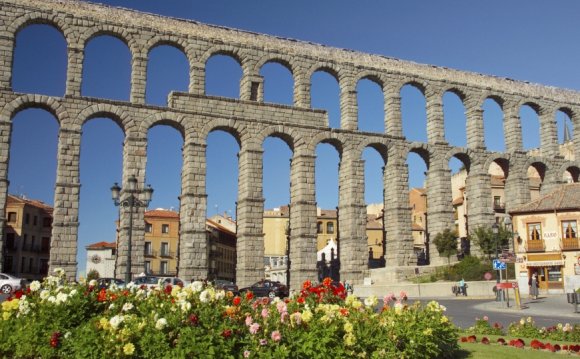 It wasn’t just roads – the Romans were way ahead of their time with other engineering feats too. Find out how building bridges helped them to forge an empire.

The Romans recognised that one of the most efficient ways to build a bridge was in an arch. Rather than stones or wood flat across a river, their bridges were built with an arching shape. Downward force from the top of an arch meets an equal force pushing up from the ground. As a result, each of the arch's sections are tightly squeezed, making the structure very rigid. Indeed, an arch bridge is so strong that it can carry loads heavier than its own weight.

To build the arch itself, wooden arches of exactly the right size would be constructed and the stone arches would be placed on top of them and held together with mortar. Most of the materials used to build the bridge came from nearby, such as the wood and probably most of the stone; but the mortar had to be transported in from somewhere else entirely. The Roman civilisation was the first to discover that mortar didn't melt in the rain, or when it came in contact with water. Their mortar was made of a ground-up volcanic stone mixed with water that, when dry, worked like cement.

One of the best examples of Roman bridge-building skill is still standing to this day in Vaison-la-Romaine.

The bridge was built by the Romans in the first century and spans the Ouvèze River. It is anchored in the rock over a ravine where the Ouvèze normally flows 17 meters below it. The bridge has been in continuous use since it was built and has already survived a direct bomb hit in World War II, as well as an attempt by the Germans to blow it up.

In September 1992 following four hours of intense rainfall a devastating flash flood occurred in the Ouvèze. The flood raised the level of the river to 2 meters above the level of the Roman bridge, killing around 50 people and causing 500 million Francs worth of damage. The only thing to survive the flash flood was the Roman bridge which stood undamaged and beautiful surveying the devastation.