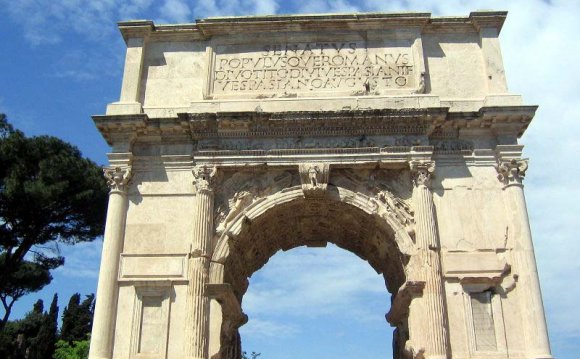 The Arch of Constantine I, erected in c. 315 CE, stands in Rome and commemorates Roman Emperor Constantine’s victory over the Roman tyrant Maxentius on 28th October 312 CE at the battle of Milvian Bridge in Rome. It is the largest surviving Roman triumphal arch and the last great monument of Imperial Rome. The arch is also a tour de force of political propaganda, presenting Constantine as a living continuation of the most successful Roman emperors, renowned for their military victories and good government.

The arch is a 21 metre high and 25.6 m wide rectangular block of grey and white Proconnesian marble. It is richly decorated in sculptures, many of which were recycled from earlier 1st and 2nd century CE monuments. They depict the emperor on campaign and performing civic duties, religious and hunting scenes, and Dacian prisoners. The arch was transformed into a fortress in Medieval times but now stands proudly, back in its original form, besides its illustrious neighbour the Colosseum of Rome. The Arch of Septimius Severus, erected in 203 CE, stands in the Forum Romanum and commemorates the Roman victories over the Parthians in the final decade of the 2nd century CE. The triple triumphal arch was one of the most richly decorated of its type. The core and foundations are of tavertine while the whole is faced with Proconnesian marble, a feature of which is its grey and white bands. It was possible to climb the arch via an inner staircase and gain access to the roof through the hollow attic.

The decorative sculpture, now badly weathered, shows the military campaigns in Parthia, the seasons, and victories. The arch has the typical central keystone which here represents Mars, the Roman god of war. The smaller arches also have keystones which represent Bacchus and Hercules – gods which Septimius Severus held in particular esteem. On top of the structure there was once a six-horse chariot in gilded bronze on which rode a statue of Septimius Severus, flanked by his two sons, Caracalla and Geta. The Arch of Janus stands in the forum Boarium of Rome. This four-way marble arch probably acted as a boundary marker and, perhaps not coincidentally, stands directly over the Great Drain or Cloaca Maxima which fed into the river Tiber. 16 m high and 12 m wide with an archway on each of its four sides, the exact date of the structure is not known but pottery finds nearby suggest the 4th century CE.

Each pier of the arch has two rows of three niches, each topped by an elegantly carved semi-dome made to resemble a clam shell. It would seem likely that statues would have adorned these niches but, unfortunately, none survive. The keystones on each side depict Minerva and Roma. A staircase within the north-west pier would have once given access to the now removed upper story.

The Arch of Titus was erected by Domitian in c. 81 CE at the foot of the Palatine hill on the Via Sacra in the Forum Romanum, Rome. It commemorates the victories of his father Vespasian and brother Titus in the Jewish War in Judaea (70-71 CE) when Jerusalem was sacked and the vast riches of its temple plundered. The arch is also a political and religious statement expressing the divinity of the late emperor Titus.

Decorative marble reliefs are set either side of the inner arch and measure 2.04 m high by 3.85 m long. One panel shows the start of Titus’ 71 CE victory triumph procession as it passes through the Porta Triumphalis to the Forum Boarium with the participants carrying booty from the Temple of Jerusalem after the sacking of the city. The booty includes a seven-branched candelabra (menorah), silver trumpets, and perhaps even the Ark of the Covenant. The other relief panel is carved in three-quarter view and has Titus riding a four-horse chariot (quadriga) and shows him being crowned by a personification of Victory. The goddess Roma stands in front, holding the bridle of one of the horses. Both panels are significant artistically as they are the first full attempt by Roman sculptors to create the illusion of space and depth.