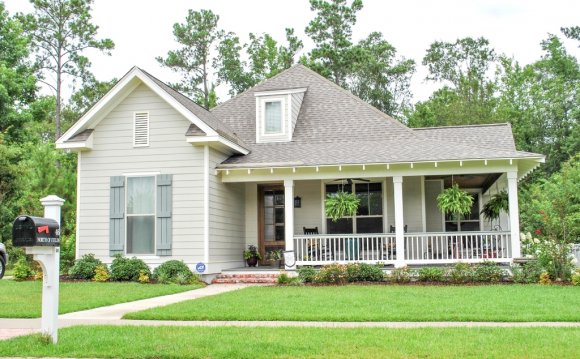 Hunting for shingle style homes recalls Supreme Court Justice Potter Stewart's famous quote about pornography. Noting that it was impossible to "define what may be indefinable" he quipped: "But I know it when I see it."

The Wil C. Johnson home (c. 1899) was designed by John Calvin Stevens. This classic shingle style home sits high above the Kennebec River town of Hallowell, Maine. Note the turret and open, rounded porch which are drawn into the skin of the house by the unifying shingles. Both elements evolved from Queen Anne style. This design has a combination of hip and gable roofs.
Photo: The Old House Web

Like the exuberant Queen Anne Victorians of the same period, shingle style homes are defined as a sum of their parts more than by any single architectural feature. On the outside, they exhibit a lack of symmetry, rich and varied siding textures, windows of varying sizes and style, and elaborate wood trim. Even the name "shingle style" needs a little clarification: The first floors of many of these grand cottages were brick or stone.

But it's sort of impossible to see one without recognizing the style.

First of all there's the shingles covering the entire house. Towers and wide porches borrowed from the Queen Anne style are covered by this unified skin, a hallmark of the style. Lines between inside and outside blur. Roofs often were covered with the same shingles as the exterior walls, although many roofs have long since been replaced with modern asphalt shingles.

Elaborate color schemes of Queen Anne homes made the rich trims and millwork stand out. Shingle style homes also featured millwork, but strove for a subtle, seamless continuity between the inside and the outside. Shingle style homes were nearly always a single color. The intent was for these homes to blend into the countryside. Often, the shingles were left to weather naturally as on colonial homes from a century before. Gambrel roofs and profiles that hug the landscape, Palladian windows and classical columns were also borrowed elements from earlier styles. This nod to the past was part of a growing interest in American history as the country marked its centennial with the 1876 Exhibition in Philadelphia. This uniquely American style is sometimes described as a maturation of the Queen Anne style. Prominent architects of the day felt at liberty to exercise their creativity. H.H. Richardson and William Ralph Emerson of Boston; John Calvin Stevens of Portland, Maine; McKim, Mead & White of New York were among the architects who helps define the style. Frank Lloyd Wright was influenced by the designs of McKim, Mead and White in designing his Oak Park, Illinois home in 1889.

John Calvin Stevens described the shingle style home he built from himself along a prominent point in Portland, Maine overlooking the Atlantic ocean:

"(The house) sits on high land...the first story is of brick, protruding here and there at random, giving dots of shadow playful in their effect. Creeping vines and stately hollyhocks help make the summer aspect of the house enticing, even to the disinterested spectator."

Soaring, open inside spaces are a clear departure from the small, closed rooms of earlier homes. Before the turn of the century, even large homes had small rooms that could be easily closed off for heating. The wide availability of central heating and the use of the homes as summer retreats made this convention unnecessary in shingle style homes. Large fireplaces of natural stone or brick were prominent, public features in shingle style homes. These open fireplaces were meant to be gathering points in great rooms rather than functional heat sources.

Shingle style homes were as varied on the inside as the outside. Public first floors often featured exotic woods and carved mouldings. Upstairs trim was often made from less expensive wood and painted. John Calvin Stevens' home in Portland had a den whose walls were "swept haphazard with burnt sienna." Stevens describes ceilings of blue and light olive brown, ivory white and deep mahogany woodwork and modest shellacked pine upstairs.