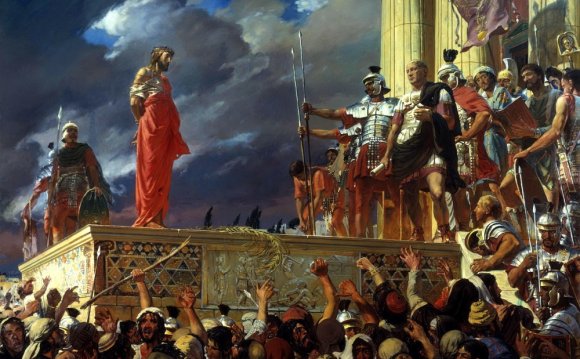 Roman art grows out of Etruscan art, and at first it is a lot like Etruscan art. Because of this, it has a close relationship to Greek art as well. Roman art as a type of its own really gets going around 500 BC with the beginning of the Roman Republic. Roman people were particularly interested in portraiture: in making statues that really looked like one particular person, especially a famous person. Greek people were more interested in ideals: what is the most beautiful man? what is the most athletic man? But the Romans were more interested in reality.

About 200 BC, the Romans began conquering Greece, and this changed their art styles a lot. As the Roman soldiers marched through Greece, they saw a lot of Greek art in the temples, and in the cemeteries, and in public squares and people's houses. The Romans thought of the Greeks as being cooler than they were, so whatever the Greeks were doing in art, the Romans wanted some. They brought home a lot of the Greek art they saw (either by buying it or by stealing it, or maybe sometimes the Greeks gave it to them for presents), and they also brought back Greek sculptors (often as slaves) to make more art for them in Rome. Augustus' Ara Pacis, for example (the Altar of Peace), shows a lot of influence from Greek art in the fancy swirls on the front, in the frieze which is so much like the Parthenon frieze, and in the meanders underneath the frieze.

Paleochristian Art - 2 The Legacy of the Roman Empire