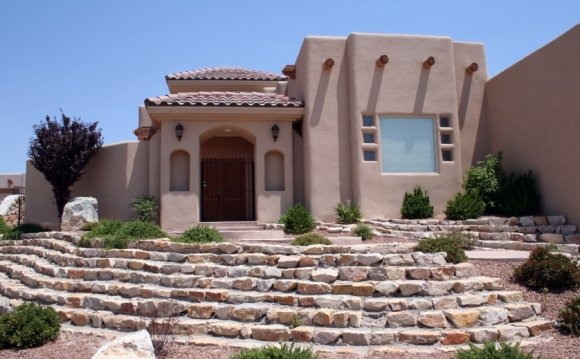 This type of home, immensely popular in the Southwest, has deeper roots than almost any other type of American architecture. It developed in New Mexico and Arizona around the turn of the 20th century, borrowing from the simple, sleek multifamily structures erected by the Pueblo Indians starting in 750 A.D. Most modern versions of pueblo architecture (also called pueblo revival) have a heavy Spanish influence.

The traditional Pueblo Indian structures that are echoed in pueblo revival style complement their natural environment. Typically made of mud, their low profile and thick walls protect their occupants and regulate indoor temperatures in the harsh desert surroundings. Pueblo-style architects borrowed some of these ideas to create a look that paid homage to the region’s history.

If you live in a hot climate, the eco-friendly advantages of a pueblo-style structure are hard to beat. The thick walls are superb insulation against the elements.

However, the flat roof common to pueblo-style homes can be prone to leakage. Older pueblo homes built with plaster rather than drywall are less susceptible to rotting, but they also may be built without the drainage aids that modern building codes now require. If you’re considering purchasing a pueblo home, don’t skip the inspection!

Characteristics of a Pueblo Style Home