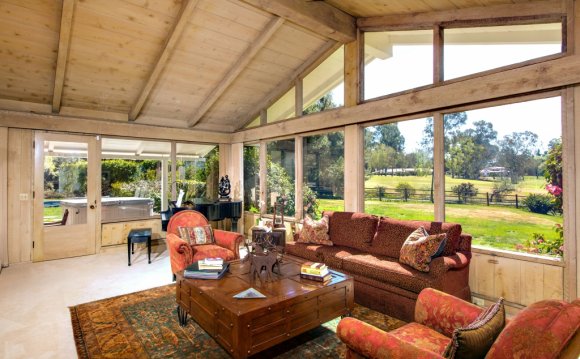 Some ranches echo the low profile of the earth-hugging Craftsman bungalows and wide overhanging eaves and hip roofs of the Prairie style. Others are an extension of the Minimal Traditional with the wrapped corner windows of the Modern style. As with all 20th century American architecture, the Ranch style is eclectic and individual houses may incorporate elements of any of its antecedents.

The typical ranch style home is a single, often rambling, story with either a hipped or gabled roof. At first glance, it may appear bereft of style, but that first impression can be deceptive. Shape ranged from an unadorned box to various L- or U-shaped configurations. Where preceding styles were more cubic, the ranch was long and horizontal with an asymmetrical facade. New distinctive features found homes of the 1950s and 60s included attached garages, sliding glass doors, and huge picture windows.

The interior of a Ranch style home is generally open with living room, dining areas, and family rooms blending into one another. Kitchens are often adjacent to the the family room (where many a TV dinner served on a tray could be enjoyed by Mom, Dad, and the kids while watching "Ozzie and Harriet" or "Bonanza"). Sliding glass doors open onto decks and patios for summertime patio living.

The Ranch, with its horizontal orientation relative to the street, is typically two rooms deep and four rooms wide, unlike many earlier styles that were just two rooms wide and presented a much smaller facade.

Ranch style architecture was influenced not only by preceding styles but also by other social and economic factors. The automobile literally and figuratively became a driving force that extended cities into the burgeoning suburbs. Rational design was also a primary influence as bedrooms were clustered into one portion of the house and living spaces in another.

Ranch style homes are gaining popularity for their ability to integrate Universal design and accessibility into its single-story floor plans, which is becoming extremely popular with boomers and seniors who want to "age in place". Gen-Xers, meanwhile, love the retro look and want a relaxed home for their young families.