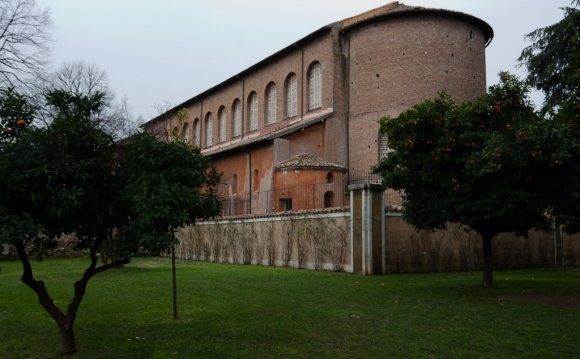 There is nothing harder than old Roman concrete. Around the former empire you still see their walls and constructions of all kinds made of poured concrete.

Remains of the grandstands of the Roman circus at Toledo, Spain (file photo)

They have been standing in the open for two thousand years. Try to scratch the concrete. Try to pick out one of the little stones.

Poured concrete was a Roman invention.

People had known about lime for a long time. They whitewashed their dirt walls to seal them from the rain. They still do that in much of Spain and Africa. And the Greeks mixed sand with the lime, trowelled it onto their walls, and painted it sometimes. It dried very hard and was even waterproof—perfect to seal the brick walls of cisterns.

Everyone also used the lime, sand, and water mixture to cement stones together for building. They continued to do that all through history until the nineteenth century. Look at what holds the big stones of a castle wall together: a thin layer of lime and sand. It is a wonderful glue.

At first the Romans used lime like everyone else. Then, at a time that must have been around the second century BC, they began to make walls by pouring the lime, sand, fine stones (aggregate), and water mixture into molds: concrete (they called it opus caementicium). Until then, they had made their walls by laying down two parallel rows of stones and then filling the space between them with rubble. That was fine until the rain or ground moisture got into the rubble and made it swell.
Someone now had the idea to strengthen the rubble pile by pouring the mixture of lime mortar on top of it. That strengthened it very well: the rubble became a hard mass and got harder and harder over weeks as it dried. If you took away the big stones on either side, the rubble kept its shape. Pouring the mix into molds was an obvious next step. You could make a wall any thickness or shape you wanted to. When the concrete had dried, you simply kicked away the mold.
From then on, the Romans began building walls with poured concrete.

The most outstanding Roman building made of poured concrete is the Pantheon in Rome. It also happens to be one of the most beautiful works of architecture ever made.

The dome is a virtuosistic creation of poured concrete. All the edges of the squares are still sharp after two thousand years and there are no little holes from air bubbles, difficult as that is to achieve with concrete.

Blessing of the Workers of Holy Name of Jesus Cathedral