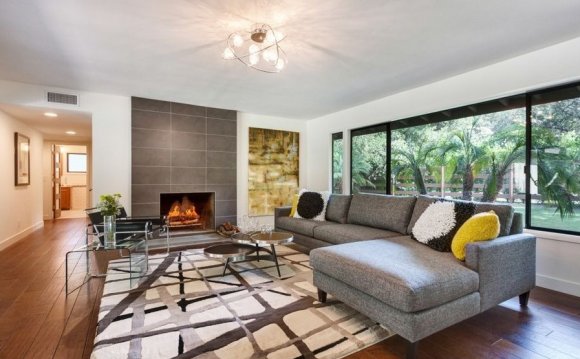 Large custom ranch house built in 1966 in Bakersfield, California. This house exhibits most of the features of the style, note long low profile and large windows.

Ranch (also American ranch, California ranch, rambler or rancher) is a domestic architectural style originating in the United States. The ranch house is noted for its long, close-to-the-ground profile, and minimal use of exterior and interior decoration. The houses fuse modernist ideas and styles with notions of the American Western period working ranches to create a very informal and casual living style.

First built in the 1920s, the ranch style was extremely popular with the booming post-war middle class of the 1940s to 1970s. The style is often associated with tract housing built at this time, particularly in the western United States, which experienced a population explosion during this period, with a corresponding demand for housing. The style was exported to other nations and so is found in other countries. Their popularity waned in the late 20th century as neo-eclectic house styles, a return to using historical and traditional decoration, became popular.

Preservationist movements have begun in some ranch house neighborhoods, as well as renewed interest in the style from a younger generation who did not grow up in ranch-style houses. This renewed interest in the ranch house style has been compared to that which other house styles such as the bungalow and Queen Anne experienced in the 20th century, initial dominance of the market, replacement as the desired housing style, decay and disinterest coupled with many teardowns, then renewed interest and gentrification of the surviving homes.

Wide eaves of a typical ranch house, this one built in 1966 in California

The following features are considered key elements of the original ranch house style, although not all ranch houses contain all of them.

The raised ranch is a two story house, i.e. the foundation serves as an additional floor, often called a split level, a modification of the dominant one story design. The common result is a two-story version of a ranch-style house. It may be built into a hill to some degree, such that the full size of the house is not evident from the curb. However, it does not become a raised ranch simply by having two floors. For it to be a raised ranch, you will have to climb a flight of steps to get to the main living floor - if not it is just a bi-level house. Even among real estate agents, this term is commonly misused.

The ranch house style was adapted for commercial use during the time of the style's popularity. As the concept of a "drive in" shopping center was being created and popularized, the ranch style was a perfect style to fit into the large tracts of ranch homes being built. Commercial ranch buildings, such as supermarkets and strip malls, typically follow the residential style with simple rustic trim, stucco or board and batten siding, exposed brick and shake roofs, and large windows.

The 20th century ranch house style has its roots in North American Spanish colonial architecture of the 17th to 19th century. These buildings used single story floor plans and native materials in a simple style to meet the needs of their inhabitants. Walls were often built of adobe brick and covered with plaster, or more simply used board and batten wood siding. Roofs were low and simple, and usually had wide eaves to help shade the windows from the Southwestern heat. Buildings often had interior courtyards which were surrounded by a U shaped floor plan. Large front porches were also common. These low slung, thick walled, rustic working ranches were common in the Southwestern states.

By the 1950s, the California ranch house, by now often called simply the ranch house or even "rambler house", accounted for nine out of every ten new houses. The seemingly endless ability of the style to accommodate the individual needs of the owner/occupant, combined with the very modern inclusion of the latest in building developments and simplicity of the design satisfied the needs of the time. Ranch houses were built throughout America and were often given regional facelifts to suit regional tastes. The "Colonial Ranch" of the Midwest and East Coast is one such noted variant, adding American Colonial features to the facade of the California ranch house. Ranch homes of the 1940s and 1950s are typically more deliberately rustic in nature than those of the 1960s and 1970s, with features such as dovecotes, Swiss board edging on trim, and generally western and even fantasy trim styling. In the 1960s, the ranch house echoed the national trend towards sleekness in design, with the homes becoming even simpler as this trend continued.

Characteristics of a Raised Ranch House