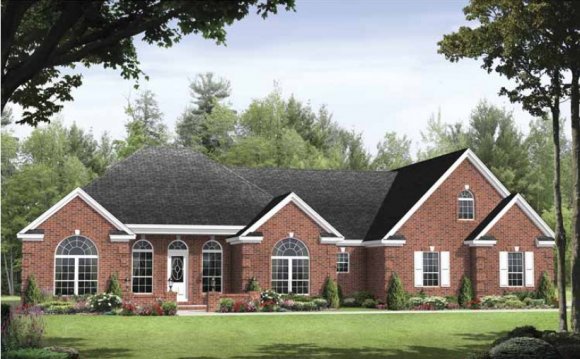 Renovating is a way of life for award-winning architect Michael Graves. Famous for his exuberant designs-from Florida's Disney World hotels topped with supersized swans and dolphins to light-flooded libraries to whistling bird teakettles-he has built his career designing updates and additions for homes, commercial buildings, and even landmarks such as the Washington Monument.

"Everybody is renovating. That's what architecture has always been, " Michael says, wryly adding, "How many times has St. Peters been renovated?" (Answer: Many.)

And while Michael is celebrated the world over for his innovative and people-friendly designs, he knows the down-and-dirty, will-this-ever-end side of remodeling firsthand. Over a period of 30 years, he has transformed an old rundown warehouse into his elegant Princeton, New Jersey, home, doing much of the work himself.

Michael bought the "ruin of a building" in 1974, when he was teaching at Princeton University and had only a fledgling practice. "Money wasn't flowing, " he says with a smile. Despite the building's drawbacks (no plumbing, no heating or cooling, bad wiring, and a seriously leaking roof), he was intrigued. Having lived and studied at the American Academy in Rome in the early 1960s, Michael was struck with how the building resembled a Tuscan barn. "It was built in 1927 as a storage warehouse by Italian masons who had come here to build the Princeton University campus, " he explains.

He appreciated the building's Italian heritage and also its no-nonsense industrial qualities. "It was rugged, " Michael says. "It was a tough building, and I liked that strength." Inspired by the design and the price-a bargain at $30, 000-he bought it. Michael continues to refer to his home as The Warehouse, although one of his colleagues playfully calls it "the house of wares, " in reference to the architect's many product designs.

Divorced and on his own, Michael renovated in stages "living like a student" for 10 years, with plywood countertops in a makeshift kitchen. "I didn't realize what it would cost to renovate it, " he admits. "As an architect I should have known. But the shell was there, so I thought all I'd have to do was finish the interiors. Little did I know there would be hundreds of thousands of dollars to follow."

The two-story structure was divided into dozens of small, mostly windowless rooms that had been leased for storage. The walls and ceilings were made of hollow clay tiles-a traditional style of building in Italy, he notes. City restrictions prohibited him from adding on, so Michael worked within the existing footprint, plotting a floor plan based on the sun. "I wanted light in the morning, so I faced the kitchen toward the east, " he says. "Given that the house is L-shaped and caught the light anyway, following the path of the sun was an easy way to figure out where to put various living spaces."

To gain more light in the dining room and create an uncovered entry courtyard, the architect removed part of an exterior wall and a section of roof where the two legs of the L meet. Three glass doors open the dining room to this courtyard, and new steel casement windows and doors throughout maximize exposure to natural light.

Renovations are about accommodating existing structural features, and the warehouse proved that point repeatedly. A low structural ceiling beam visually sliced off the north ends of the living and dining rooms. Michael's solution was to turn the narrow spaces into cozy alcoves accented by "milk-bottle-shaped" columns and barrel-arched ceilings. The dining room alcove is often where Michael sets the "children's table" when he hosts holiday family dinners.

Other structural challenges included concrete floors and no basement, which complicated the installation of mechanical systems. "I could have put piping down the walls and into floors but the floors were already established by the existing building, so that would be a real job, " he says. Instead, he built soffits around each room to contain heating and cooling ducts and other mechanicals. Rather than disguising the vents, Michael designed artistic black grills, set them on the vertical, and symmetrically arranged them at ceiling height like decorative elements.

"The existing ceilings were low, and I wanted the illusion of a little more height, " Michael says. "Lowering the ceiling around the edges created raised recesses that we painted a very light blue in the center of most of the room."

A glass roof-the same as those used in greenhouses-tops the two-story library adjoining the living room. Floor-to-ceiling shelves line two walls of the room, and vertical posts support the shelves like miniature columns. "They're actually PVC pipe faux painted to look like wood, " Michael says. The shelves are MDF (medium density fiberboard), also stained to look like fine wood.

The house is comfortably furnished with Michael's collection of classic honey-toned Biedermeier chairs, chests, and tables. "I started rummaging around in the '70s and '80s, when Biedermeier wasn't as popular as it is now, " he says. "I like it for its architectural qualities. The pieces are like little pavilions. They're wonderful little follies, most of them."

A prolific designer of all things home related, Michael has created products for companies like Alessi, Baldinger Architectural Lighting, Dansk, Duravit, Delta, David Edward furniture, and Steuben, as well as housewares, decorative accessories, and furnishings for Target. Not surprisingly, his creations fill his home, including light fixtures and sconces, upholstered chairs, clocks, dishes, a chess set, and nearly every kitchen accessory and small appliance.

While he has original art by such notables as French painters Jean-Baptiste-Camille Corot and Jean Prudhomme, much of the artwork is by his hand, including several Corot look-alikes in the dining room. Arranged throughout his home are statuary, pottery, candleholders, and other Grand Tour souvenirs dating from the 1800s and early 1900s. Well-heeled young adults of that era frequently took Grand Tours of famous historic sites, returning with souvenirs. Michael took his own Grand Tour when he was studying in Italy and collected many antique tour treasures.

Although The Warehouse renovation is basically finished, Michael continues to make changes. He was stricken in 2003 with a spinal disease that resulted in lower-body paralysis, and he is now restricted to a wheelchair. Undaunted, he added an elevator and redesigned his upstairs master bath to accommodate his wheelchair.