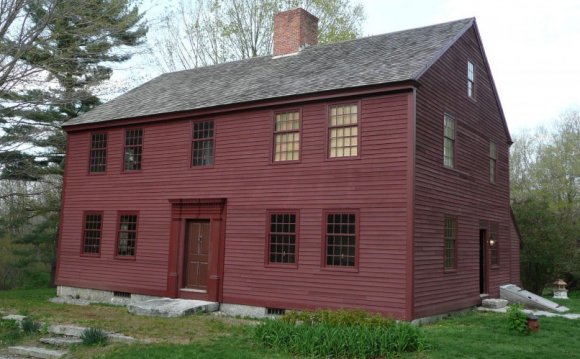 The American farmhouse was a functional home before it was an architectural style.

In fact, it is a hybrid of architectural styles that were blended to produce these practical houses that would shelter farmers and their families and serve as a functional center to farm life.

Origins of the American Farmhouse Style

The design of the American farmhouse was initially influenced strictly by function and geography. The farmhouse was always unpretentious, straightforward and functional—shaped by the needs of the farmers, the local climate and the materials available.

American colonists built the earliest farmhouses in the early 18th century. It was a community effort; there were no architects or hired builders. As a result, early farmhouses were often built of raw logs—in what is considered a log-cabin style—or some combination of rough-hewn logs, native stone or mud.

That changed in the mid-19th century, when railroads made it possible to transport manufactured materials across the country. This gave farmers access to many more style possibilities for their humble dwellings as well as the ability to build with brick, lumber and quarried stone.

The access to materials, particularly milled lumber, allowed farmhouse builders to tip their hats to the style of the moment, too: Many farmhouses sport elements of other styles, such as Greek columns instead of plain porch supports to produce a Greek revival farmhouse, or a few bits of stained glass and jigsaw-cut trim to give a Gothic flavor.

Evolution of the American Farmhouse Style

American farmhouse architecture evolved to meet the needs of families who lived where they worked—on their farms. And what those farm families required were simple structures that sheltered them, gave them a place of pride to entertain an important relative or community and, most of all, to live their lives in some comfort.

What resulted was a sturdy, no-nonsense house that was built to last. Farmhouses were built to accommodate the family and its daily routines, complete with all the messiness that farming entails. But farmhouses also included segregated formal, “company” spaces at the front of the home, with the more chaotic family space in back.

Many farmhouses began as very modest structures, perhaps two rooms wide and one room deep—just enough space to house a young farm couple and their first child. As the family grew and the farm became more prosperous, the farmer could expand the house as needed. Many farmhouses have seemingly random ells and wings that were added as needed to accommodate these changes in family size and status.

Today, there is a growing interest in a simple, back-to-nature lifestyle. The American farmhouse symbolizes that ideal, and it gives today’s homeowners a tangible and sentimental connection to the nation’s history.